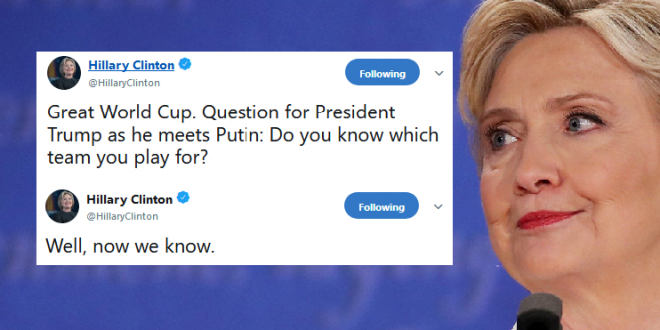 Hillary: Now We Know Which Team Trump Plays For

Hillary Clinton took aim at President Donald Trump’s much-anticipated meeting with Russian President Vladimir Putin, calling into question her former presidential campaign rival’s loyalties just hours after he tweeted a congratulations to the hosts of the World Cup. Clinton followed up on her jab at the President on Monday evening following the summit, when she wrote: “Well, now we know.” Clinton’s remark comes after Trump received sweeping criticism for his comments about Putin and the US intelligence assessment of Russian interference in the 2016 election.

Previous McConnell Backs Away From Trump: Russians Are Not Our Friends, I Entirely Believe Our Intel Community
Next Sean Hannity Flips Out Over GOP Response To Trump