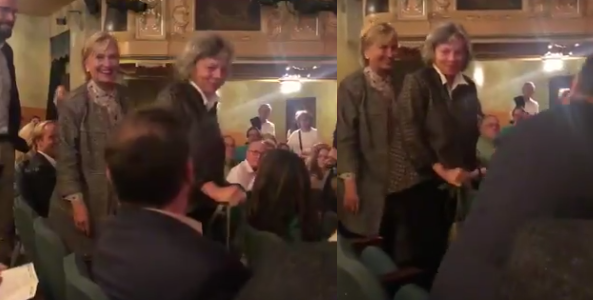 Last night Hillary Clinton received a standing ovation from the audience at a performance Hello Dolly at Broadway’s Shubert Theatre, complete with chants of her name and one audience member shouting, “You can still be 46!”

Clinton was supposed to have seen the show back in April, but instead chose to be honored at the New York City LGBT Center, telling that audience, “I really struggled, but being with all of you is a little bit like being at a very stylish family reunion.”

As you can see, after the show Clinton posed with ecstatic members of the cast, including Bette Midler, who won the Tony for her performance. The show closes on August 25th.

#HILLARYCLINTON CAME TO #“HELLODOLLY TONIGHT!! What a thrill! The crowd stood, clapped and chanted her name until the lights went down😂. It made us all unbelievably happy to see her…

Finally saw Bette in #HelloDolly and was rewarded with a visit from Hillary. #nothingbutrespectformypresident pic.twitter.com/AlJcrvG1p5

Retweeted Chris Gando (@cgando1):#HelloDolly tonight with @BetteMidler This is from our seats in the balcony. @HillaryClinton 😃 pic.twitter.com/ttxgAthU1w https://t.co/IkcajZXmj3

Hillary Clinton was in the audience at Hello Dolly tonight and the crowd chanted “Hillary!” like at the convention, and one lady tried to start an “our president” chant, and for a minute, everything felt kind of ok