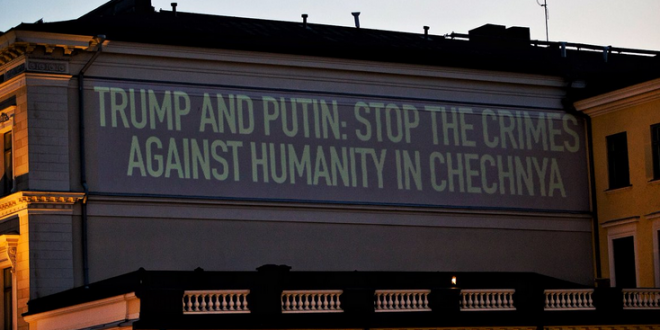 Today, just ahead of tomorrow’s Trump-Putin summit in Helsinki, HRC projected an enormous message onto the Presidential Palace in Helsinki demanding that Donald Trump and Vladimir Putin immediately end the ongoing anti-LGBTQ crimes against humanity occurring in the Russian republic of Chechnya.

For more than 15 months, Donald Trump and his administration have refused to publicly condemn the systematic torture, abuse, and murder of LGBTQ people occurring in Chechnya as Vladimir Putin has licensed the violence to continue. More than a 100 LGBTQ people have been rounded up, tortured, and abused — and as many as 20 have been murdered.

HRC’s message was projected onto the side of the Presidential Palace where the delegations and press corps are gathering for Monday’s summit.

“Trump has unconscionably turned a blind eye to some of the worst anti-LGBTQ atrocities in a generation, including monstrous attacks on gay and bisexual men in Chechnya,” said Ty Cobb, Director of HRC Global. “HRC is here in Helsinki to demand Donald Trump end his deafening silence, publicly condemn these Chechen crimes against humanity, and call on Putin to investigate and bring the perpetrators to justice.”

1/ Last year, reports surfaced of Chechen authorities rounding up and detaining more than 100 men who were suspected of being gay or bisexual and 20 have been murdered. Today @HRC confronted Trump and Putin in Helsinki over these crimes against humanity. #EyesOnChechnya pic.twitter.com/BJL6YkZNFa

Previous Bannon Appears To Call For Literal “War” Over Brexit
Next Russia Agrees With Trump: Mueller Is On A Witch Hunt