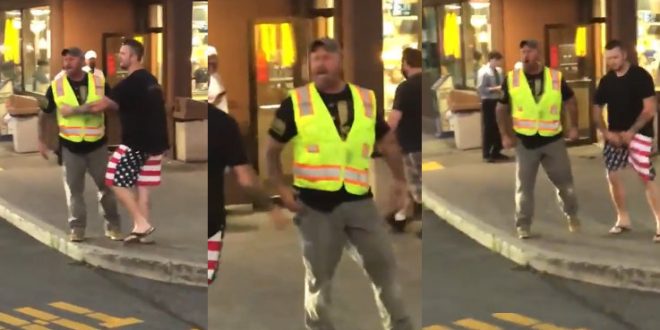 A Hayden, Idaho, man has been arrested and charged with a hate crime stemming from an incident at a McDonald’s in Coeur d’Alene on July 12. Richard Sovenski, 52, was booked into Kootenai County jail Tuesday on one count of misdemeanor battery and one count of felony malicious harassment, Idaho’s hate crime statute, according to Coeur d’Alene Police Capt. David Hagar.

A group of high schoolers from a Spokane youth group traveled to Coeur d’Alene last Thursday to hear a guest preacher. Afterward, the group’s leader, Jose Ceniceros, took them out for ice cream at McDonald’s. As the group was getting ready to leave Sovenski started hurling racial slurs and profanity at them, Ceniceros says.

A woman, who was standing with Sovenski, later told police that the kids were “being rude, dancing and running around causing a disturbance.” Ceniceros disputes this, and says as they approached the door to leave Sovenski sucker punched Ceniceros and threw him to the ground. Ceniceros began recording Sovenski with his cell phone once they were outside and has shared the video with the Inlander.

Documents say the video shows Sovenski yelling and cursing at the group as well as calling one of them a ‘half breed’ The video also shows another man trying to intervene and yelling at the group, and making sexually suggestive gestures toward them. That man was identified in documents as Sovenski’s son.

In a follow-up interview with officers, Sovenski told police the kids at the McDonald’s were being rude in line and he told them to learn some manners after one of them cut in line. Sovenski said an argument escalated and he stepped outside with Ceniceros. He said he thought Ceniceros was going to hit him so he pushed him, according to documents.

According to Sovenski, he didn’t push the man hard and he must have “tripped over his own feet.” When an officer asked him about yelling slurs at the group, he said he was only trying to “get the upper hand” in the argument and knew the comments would “get under their skin,” documents said.

“Fuck you, you fucking half-breeds! Get the fuck out of Idaho!” the man can be heard saying on video. “You got a fucking problem, I’m your fucking guy!” he adds. “I will fuck you up in a fucking heartbeat you little faggot!”

“That’s why I don’t come to Idaho,” one of his youth group members can be heard saying as Sovenski cusses them. “Yeah! That’s why you don’t come to Idaho!” Sovenski replies. “We’re real fucking men here, you bitch!” Toward the end of his rant, Sovenski appears to drop the n-word before launching a few more profanities and going inside.