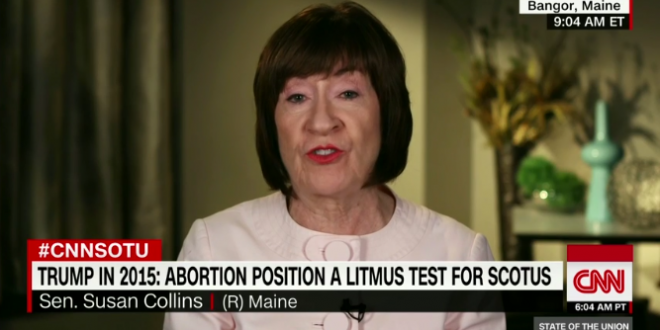 “I’m going to have an in depth discussion with the nominee and I believe very much that Roe v. Wade is settled law, as it has been described by Chief Justice Roberts,” Collins said. “It has been established as a constitutional right for 46 years — 45 years, and was reaffirmed 26 years ago.”

Collins, who will be a key swing vote in the nominee’s upcoming confirmation process, said on Sunday that she was looking for a nominee who would “demonstrate a respect for precedent.”

GOP Sen. Susan Collins says Trump told her in a meeting that he would not ask a Supreme Court justice nominee whether they would overturn the ruling in Roe v. Wade #CNNSOTU https://t.co/coMHU0eerK https://t.co/cYUwkKh2ll

Susan Collins to @jaketapper: “The President told me he would not ask that question” about Roe.
He doesnt need to, Susan Collins. The Federalist Society picked the list for Trump because they already know which judges are anti-Roe.

.@jaketapper points out Trump promised Roe is a litmus test. Susan Collins replies Trump told her he wouldn’t ask the nominee about Roe. ARE YOU KIDDING ME? #mepolitics

Susan Collins on CNN: “Justice Roberts has made very clear he considers Roe v Wade to be settled law.”

Previous Jeanine Pirro On Yesterday’s Protests: The Socialists Are Coming And They Want To Take What You Have [VIDEO]
Next PORTLAND: Riot Police Shut Down Rally For Extremist GOP US Senate Candidate After Clashes With Antifa