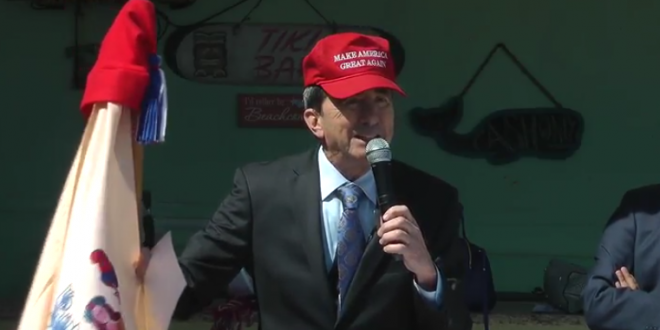 The National Republican Campaign Committee (NRCC) today withdrew its support for New Jersey congressional candidate Seth Grossman, a right-wing pundit who has repeatedly made bigoted remarks. Grossman is the Republican nominee for New Jersey’s 2nd Congressional District. He is a lawyer who has also done stints as a radio host and newspaper columnist. Grossman received the NRCC’s backing on June 6 after he won his Republican primary contest (the Republican organization has since removed a statement about the endorsement from its website).

As Politico’s Zach Montellaro reported, NRCC Chairman Steve Stivers issued a statement today saying, in part: “Bigotry has no place in society — let alone the U.S. House of Representatives. The NRCC withdraws our support of Seth Grossman and calls on him to reconsider his candidacy.”

Last November, incumbent GOP Rep. Frank LoBiondo announced his retirement. But don’t get too excited about the Democratic nominee:

Jeff Van Drew has voted against raising the minimum wage and gay marriage. He often sides with industry on environmental issues and carries an A rating from the NRA. And he’s the odds-on favorite to be New Jersey’s newest Democratic congressman.

In the party’s first real crack at winning the South Jersey-based district held by retiring Rep. Frank LoBiondo (R-N.J.) for more than two decades, the Democratic Party establishment — at every level — is throwing its collective weight behind Van Drew, leaving local progressives baffled, frustrated and more than a little angry.

The anger has spilled out into public forums. At one, high school student Emily McGrath confronted Van Drew — who had one day earlier told her class he did not accept donations from the NRA — about a $1,000 donation she had discovered. The videotaped confrontation, in which McGrath said “Senator, you lied,” made headlines around the state.

Previous REPORT: It Was Always Going To Be Brett Kavanaugh
Next American Family Association: #StopKavanaugh