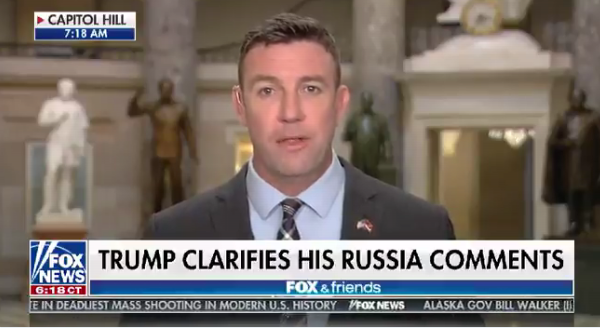 Rep. Duncan Hunter (R-Calif.) said Wednesday that he “doesn’t care” if President Trump misspeaks — including about Russia. “He’s doing things that are a direct affront to Russia. I don’t care if he misspeaks or if he says the wrong thing,” Hunter said on “Fox & Friends.”

“He has a different technique, that’s why I voted for him, that’s why the American people elected him,” the lawmaker said of Trump. “What he wants to do is go get things done. I have no problem with it, my trust is in the commander in chief,” Hunter said.

You may recall that last year Hunter said this about Trump: “He’s an asshole, but he’s our asshole.” And this: “Trump talking about things and saying things about things is different than him saying what he’s going to do.” Hunter, by the way, was once of the loudest opponents of the repeal of DADT.

.@Rep_Hunter: I don’t care if President Trump misspeaks… he has a different technique–that’s why I voted for him and that’s why the American people elected him. @foxandfriends pic.twitter.com/RWiBtQubIj