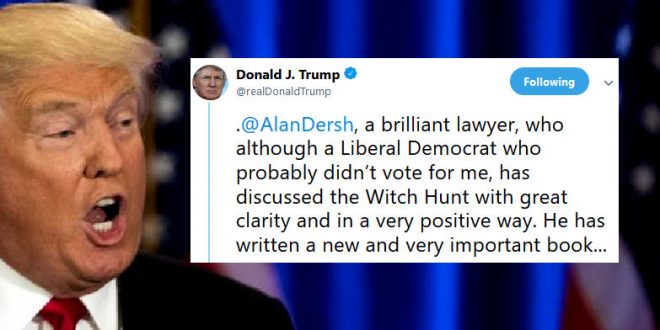 The Harvard law professor said earlier this month that his new book argues that the Supreme Court could intervene and reverse a vote to remove Trump from office. Dershowitz also makes the case that if incriminating evidence of collusion with the Russian government emerged, it wouldn’t be a criminal offense because it’s “not a crime to collude with a foreign government.” Dershowitz writes in the book that impeaching Trump would be possible “if he did it because he was paid or extorted.”

.@AlanDersh, a brilliant lawyer, who although a Liberal Democrat who probably didn’t vote for me, has discussed the Witch Hunt with great clarity and in a very positive way. He has written a new and very important book…

…called “The Case Against Impeaching Trump,” which I would encourage all people with Trump Derangement Syndrome to read!