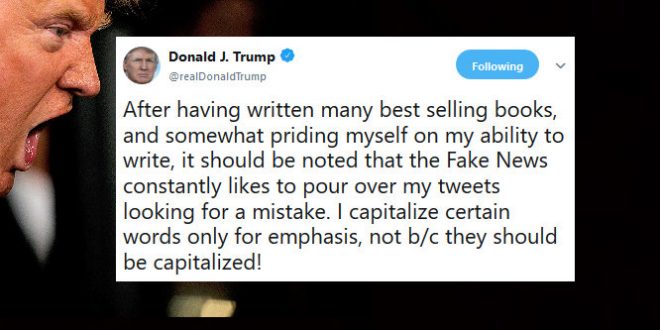 Glorious Leader is ever so pissed that people are mocking his very high IQ by pointing out his misspellings and random capitalizations on Twitter. After all, people, he has written books! Very bigly smart books! Yeah, OK so those books were actually written by paid ghostwriters but shut up, you stupid snowflakes.

After having written many best selling books, and somewhat priding myself on my ability to write, it should be noted that the Fake News constantly likes to pour over my tweets looking for a mistake. I capitalize certain words only for emphasis, not b/c they should be capitalized!

This after misspelling "disgrace" in his previous tweet. https://t.co/1uAPS0UXKi

Lesson about pour, pore and poor. I poured a cup of coffee. I pore over books to read. Lacking sufficient funds to live in Donald Trump's society, means you are poor.

Previous Pruitt Directly Asked Trump To Give Him Sessions’ Job
Next BRITAIN: Gov’t Earmarks Up To $6.6M In Security Costs Should Trump Visit His Scotland Golf Course During Trip