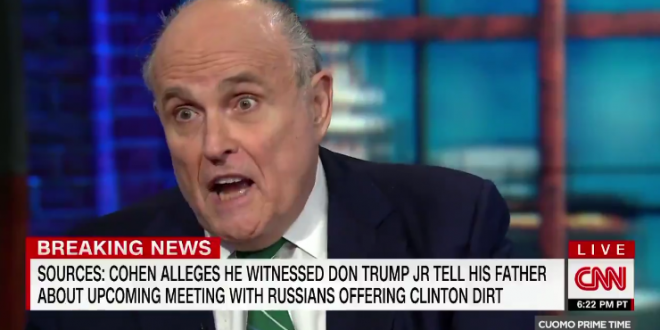 Rudy Giuliani accused Michael Cohen of being a “pathological liar” after reports emerged that he would tell special counsel Robert Mueller that Donald Trump knew about the infamous 2016 Trump Tower meeting before it happened, contradicting the president’s claim of ignorance.

“I expected something like this from Cohen, he’s been lying all week. He’s been lying for years,” Giuliani, the former mayor of New York City and now member of Trump’s legal team, told CNN’s Chris Cuomo on Thursday night. He also said of Cohen, “I guarantee you is a proven liar.”

It was a marked change in tone from June, when Giuliani said he was “very comfortable” about Cohen, did not believe he would lie, and that he had no incriminating information on Trump anyway.