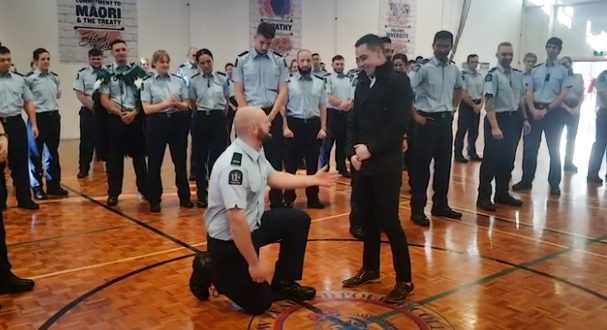 Graduating from police college will be a day Hawke’s Bay-born Constable Erik Meechan never forgets – but not for the obvious reason. It was the day he got down on one knee and proposed to his partner of five years, Matty Judd, in front of fellow graduating recruits, their families and Commissioner Mike Bush and Police Minister Stuart Nash last week.

As the graduating members of Wing 315 finished a thunderous haka – the last task of their initial training at the Royal New Zealand Police College – Meechan stepped forward. “Could Matty Judd please come forward?” Meechan said. When a surprised Judd stepped out of the audience, Meechan dropped to one knee and proposed.

Watching it unfold rendered the Police Minister speechless and somewhat emotional. “Every now and again you get a little bit emotional and I must admit I had a little bit of a lump in my throat.”