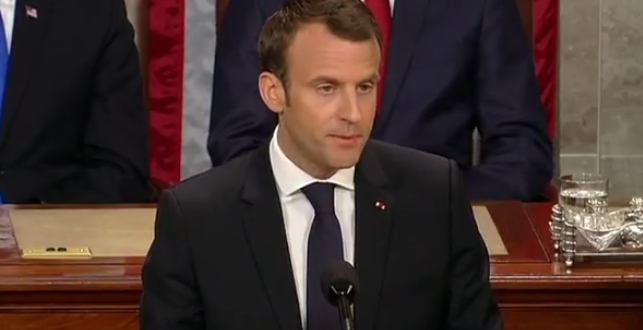 It was the week that Emmanuel Macron, the slick young French president who once said that he hoped to rule above the political fray like the Roman god Jupiter, was brutally reminded that he is, after all, a mere mortal.

His top aides were grilled on live television and the opposition shut down Parliament. And to cap it all he was forced to issue a bizarre denial that he was having a homosexual affair with the bodyguard who sparked a political scandal after being filmed beating up May Day protesters.

Seeking to dispel rumours on the internet, Macron joked: “Alexandre Benalla has never had the nuclear codes. Alexandre Benalla is not my lover.” His MPs laughed but the joke did not go down well with the public. His popularity ratings, already down, fell to a record low.

Benalla, a presidential aide and member of Macron’s inner circle, has been indicted for gang violence and impersonating a police officer after he attacked two demonstrators at the protest, at which he was supposed to be an observer. The Élysée Palace, which knew about Benalla’s assault the following day, kept it quiet for more than two months.

He was initially suspended from his job for two weeks, and it was only last week when Le Monde newspaper published video footage of the attack that police summoned Benalla for questioning. He was put under official investigation on Sunday and was sacked after the crisis escalated.

Macron is under increasing pressure to explain why his office did not report Benalla’s actions to the police. He said there was no attempt to cover up the incident and he considered his staff had done “what they had to do”.

In his first interview, Benalla offers a glimpse into palace life at Macron’s Élysée: “Everything at the Élysée is based on how close people think you are to the president. Did he smile at you, call you by your name, etc. It’s a court phenomenon.” https://t.co/CJOEYBGHlv

Alexandre Benalla was not a policeman, but by dressing up as one he has embarrassed Emmanuel Macron https://t.co/W2AhLjpt0b

The French government is facing fierce public backlash over the beating of a protester by President Macron’s aide Alexandre Benalla #AffaireBenalla #tictocnews pic.twitter.com/jEjdJeYApu