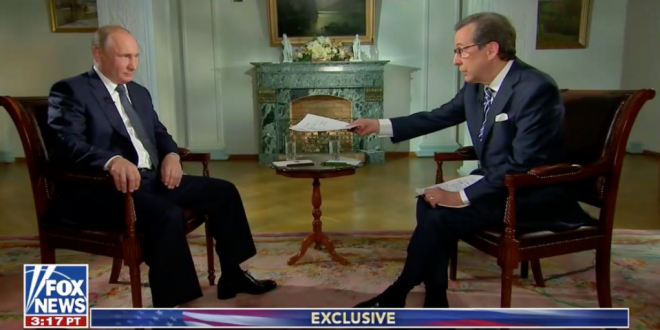 After President Donald Trump refused to confront Vladimir Putin over Russia’s direct interference in the 2016 U.S. election, Fox News host Chris Wallace decided to do it for him.

In an “exclusive” interview with the Russian president that followed his private meeting with Trump and their shocking joint press conference, Wallace literally held up Special Counsel Robert Mueller’s indictment of 12 Russian intelligence officers and demanded an explanation.

Putin appeared to laugh in Wallace’s face as he outlined the charges. When the host tried to hand him the stack of papers, the Russian president would not touch it, indicating that the host could place it on the table between them.

“Haven’t presidents been killed in the United States?” Putin replied. “Have you forgotten about — well, has [President John F.] Kennedy been killed in Russia or in the United States? Or [Dr. Martin Luther] King? What — and what happens to the clashes between police and, well, civil society, and some — several ethnic groups? Well, that’s something that happens on the U.S. soil. All of us have our own set of domestic problems.”