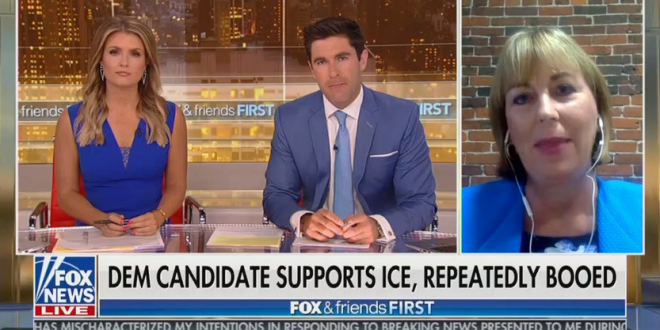 On Monday morning, the hosts of Fox & Friends First thought they were getting yet another guest who comports with the show’s conservative, pro-Trump politics. But oh, did their producers ever book the wrong guest.

Fox host Jillian Mele wound up for some slow-pitch softball: “And joining us now, that candidate. The only Democrat on stage to support ICE. Ann Kirkpatrick, thank you for joining us, we appreciate it. Tell us why you do support ICE.”

“Good morning. I’m actually here to speak directly to Donald Trump,” the woman began, appearing via satellite. “I feel that what’s happening at the border is wrong. I’m a mother of four and I believe that separating kids from their parents is illegal and inhumane.”

More of the transcript via Media Matters:

BARBARA L’ITALIEN: I’m actually Barbara L’Italien, I’m a state senator representing a large immigrant community and running for Congress in Massachusetts, I keep thinking about what we’re putting parents through and imagining how terrifying that must be for those families, imagining how it would feel not knowing if I’d ever see my kids again. We have to stop abducting children and ripping them from their parents’ arms, stop putting kids in cages, and stop making three-year-olds defend themselves in court —

ROB SCHMITT (CO-HOST): That practice has stopped at this point Ms. Kirkpatrick, right?

L’ITALIEN: Again, my name is Barbara L’Italien and I refuse to believe that our only options are open borders or traumatizing —

SCHMITT: That didn’t go as planned.

According to the L’Italien campaign, Fox News’ mix-up occurred after the network reached out to L’Italien staffers mistakenly thinking they worked for Kirkpatrick. “They reached out to our staff believing they were reaching the Kirkpatrick office due to their own failure of due diligence,” a source with the L’Italien campaign told ThinkProgress. “Over the process of getting the interview scheduled, they repeatedly showed very little grasp on the facts, down to whether or not Ann Kirkpatrick was still in Congress.

This is incredible. @FoxFriendsFirst thought they booked pro-ICE Dem Ann Kirkpatrick on show, but accidentally booked Barbara L’Italien
(@teambarbara) instead.