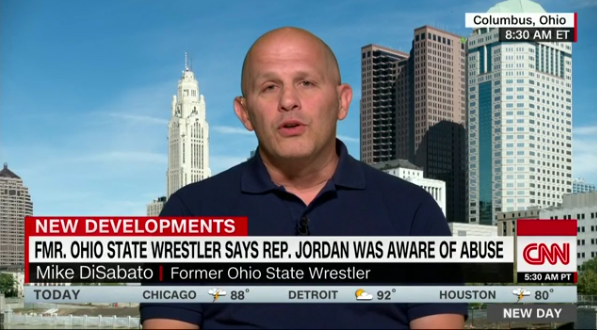 Jordan, a House Freedom Caucus founder who coached wrestling at Ohio State from 1986 to 1994, claims he did not have any knowledge of the allegations of abuse against Dr. Richard Strauss, who died in 2005. DiSabato said Jordan “is absolutely lying if he says he doesn’t know what was going on,” and appeared on CNN to further detail the abuse and Jordan’s alleged knowledge of it.

He explained that Jordan was “more like a big brother than a coach,” and that their families are close and they still talk. When CNN’s John Berman asked if he had spoken to Jordan at the time about the abuse, DiSabato replied, “Absolutely.” He added that their conversations were often in the form of “locker room banter.”

Rep. Jim Jordan has denied that he turned a blind eye to alleged sexual abuse of wrestlers at Ohio State University when he was an assistant coach there decades ago. @JeanCasarezCNN has the story. https://t.co/ebn3ySNlGQ pic.twitter.com/MYjSIumGPZ

Mike DiSabato is a former Ohio State University wrestler who says he was a victim of Dr. Richard Strauss in high school and college. He says Rep. Jim Jordan was aware of accusations of sexual abuse against Strauss.

He tells his story in his own words: https://t.co/azfI1y6xdh