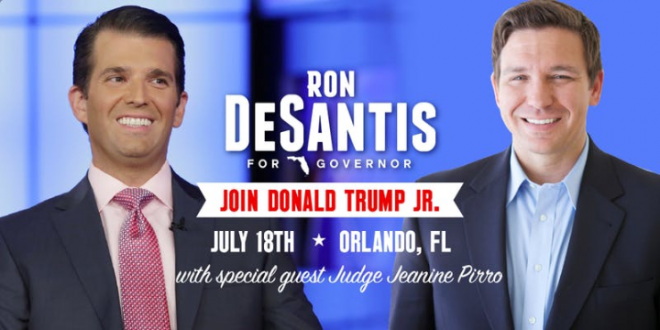 Donald Trump Jr. and Judge Jeanine Pirro will be in Orlando on Wednesday to headline both a rally and private fundraiser for U.S. Rep. Ron DeSantis’ campaign for governor.

Trump Jr., the eldest son of President Trump, and Pirro, a Fox News personality, are scheduled to appear at an event at B.B. King’s Blues Club on International Drive in Orlando at 2 p.m. Wednesday. Tickets were available online.

Later that evening, Trump Jr. and Pirro are scheduled to appear at a private fundraiser at the Alaqua Country Club in Longwood. Bob and Diane Dello Russo, Eric and Diane Holm and Richard Haines were listed as hosts for the $3,000-a-plate VIP fundraiser and $500-a-plate general fundraiser.

Congressman Matt Gaetz of Florida is one of the finest and most talented people in Congress. Strong on Crime, the Border, Illegal Immigration, the 2nd Amendment, our great Military & Vets, Matt worked tirelessly on helping to get our Massive Tax Cuts. He has my Full Endorsement!