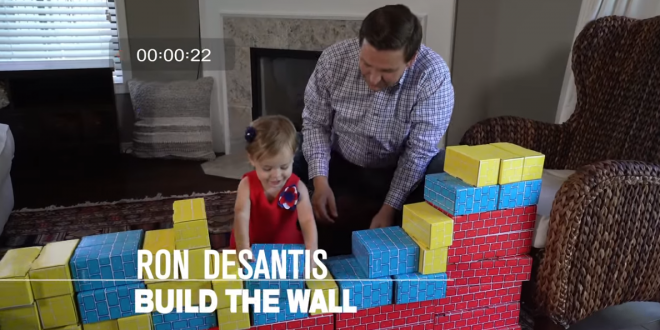 U.S. Rep. Ron DeSantis’ latest ad in his Republican primary race for governor features him teaching his children with a curriculum heavy in the ways of President Trump. “Build the wall,” he says as his son piles brick-like blocks on top of each other.

“Then Mr. Trump said, ‘you’re fired.’ I love that part,” DeSantis reads to another child from Trump’s “Art of the Deal” book. “Make America great again,” DeSantis says to his daughter Madison, teaching her to talk.

The 30-second clip is narrated by DeSantis’ wife Casey, and highlights the importance of Trump in a heated primary with Agriculture Commissioner Adam Putnam. It’s set to run statewide starting Tuesday, according to his campaign.