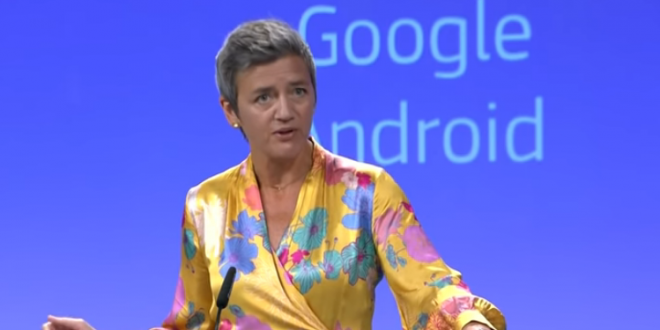 Google was hit with a $5.1 billion fine by European antitrust officials on Wednesday for abusing its power in the smartphone market, in the region’s latest move to rein in the clout of American tech companies. The penalty of 4.34 billion euros was a record, and far larger than the €2.4 billion, or about $2.8 billion, that the European Union levied on Google last year for unfairly favoring its own services in internet search results.

The decision on Wednesday highlighted how European authorities are aggressively pushing for stronger regulation of the digital economy on issues including antitrust, privacy, taxes, and the spread of misinformation and hate speech.

European officials said Google, which makes the Android mobile operating system used in smartphones, broke antitrust laws by striking deals with handset manufacturers such as HTC, Huawei and Samsung. The agreements required Google’s services, such as its search bar and Chrome browser, to be favored over rival offerings. European authorities said those moves unfairly boxed out competitors.

Fine of €4,34 bn to @Google for 3 types of illegal restrictions on the use of Android. In this way it has cemented the dominance of its search engine. Denying rivals a chance to innovate and compete on the merits. It’s illegal under EU antitrust rules. @Google now has to stop it

Previous Trump Questions NATO Mutual Defense Treaty: Why Should We Protect “Tiny And Aggressive” Montenegro?
Next Most GOP Pols Privately Say Trump Is Un-American But Won’t Call Him Out Because They Fear His Rabid Fans