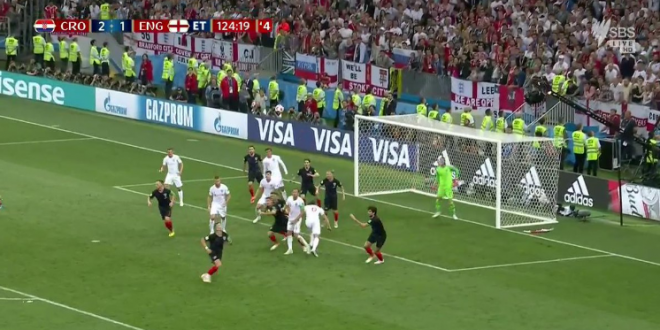 Croatia advanced to its first World Cup final by joining Argentina (1990) as the only teams to win a semifinal match they trailed at halftime. Croatia fell behind on Kieran Trippier’s free kick in the fifth minute, but leveled the score on Ivan Perisic’s leaping, left-footed volley in the 68th minute. Mario Mandzukic scored the game-winner in extra time, a left-footed shot from the left side of the box that beat England goalkeeper Jordan Pickford. England was looking to advance to its first World Cup final since 1966. Croatia will play France in Moscow on Sunday.

It’s a win for HRVATSKA #Croatia and there are happy tears and cheers from ecstatic fans at the Croatian Cultural Centre!! #FifaWorldCup18 #CroatiavEngland @CKNW pic.twitter.com/rAL9ELvZdj

England fans in Hyde Park waste about $10,000 in beer on team’s first goal against Croatia pic.twitter.com/lfCxGZfqNW

The #WorldCup dream ends for this brave #ThreeLions squad.

Congratulations to Croatia on reaching the final. pic.twitter.com/TvwTCmawVV

The reaction in Zagreb when that Croatia equaliser went in. 😨 pic.twitter.com/iVUPLsaOaq

Previous PHILIPPINES: Catholic Church Calls For Three Days Of Fasting In Repentance For President’s “Blasphemy”
Next Dwayne Johnson: I Won’t Run For President In 2020