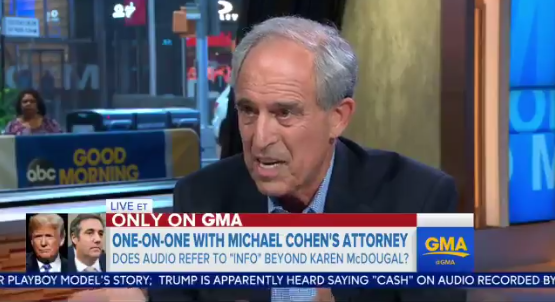 Cohen’s Lawyer: Trump Will Be Done In By The Truth, There Are More Tapes, And We Don’t Want A Pardon

Appearing on Good Morning America Wednesday, Lanny Davis told ABC’s George Stephanopoulos that while there’s nothing criminal revealed on the tape, “it’s about lies and truth.”

“The power of the truth is what Michael Cohen now has, no matter what Mayor Giuliani invents for a president who’s been known to lie,” Davis said. “Don’t believe me, listen to the tape the way John Dean had a tape that did in Richard Nixon.”

“This is about truth vs. lying, and ultimately Donald Trump is going to be done in by the truth,” he added. The lawyer then told Stephanopoulos that Cohen is not seeking a pardon from Trump — ending the interview by revealing his client has “more tapes” of the president.

FULL INTERVIEW: Michael Cohen’s attorney, Lanny Davis, one-on-one with @GStephanopoulos; says there are “certainly” more tapes, and that Michael Cohen is not seeking a pardon from the President: https://t.co/m55qCWk199 pic.twitter.com/UXZPHIad1X

Previous Carter: The US Is No Longer A Human Rights Leader
Next Trump Rages About Release Of First Cohen Tape