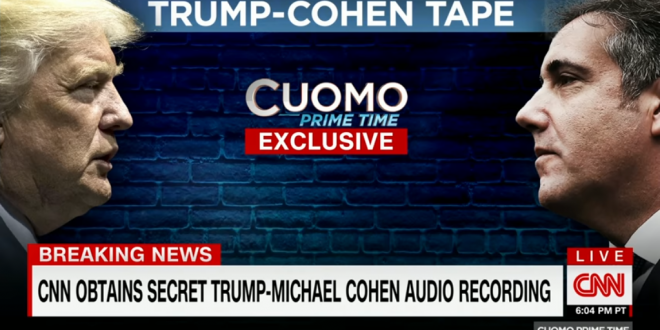 Presidential candidate Donald Trump is heard on tape discussing with his attorney Michael Cohen how they would buy the rights to a Playboy model’s story about an alleged affair Trump had with her years earlier, according to the audio recording of the conversation aired exclusively on CNN’s “Cuomo Prime Time.”

Cohen told Trump about his plans to set up a company and finance the purchase of the rights from American Media, which publishes the National Enquirer. The recording captures what appears to be a routine business conversation of several matters on their agenda. The audio is muddled and the meaning of Trump’s use of the word “cash” is disputed by the two sides.

President Trump’s attorney Rudy Giuliani told Fox News’ Laura Ingraham that the audio of Michael Cohen and Trump speaking about a payment to Playboy model Karen McDougal, which was leaked to CNN on Tuesday, gives “no indication of any crime being committed.”

The recording suggests that Trump had knowledge of the purchase for the rights of McDougal’s story, who claims she had an affair with Trump years ago. Giuliani, however, stood by his claim that Trump was unaware of the transaction.