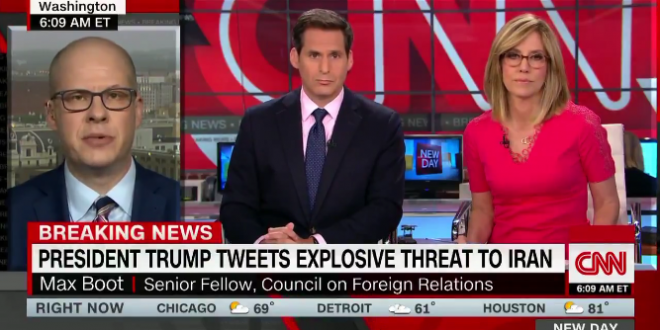 CNN Host: Trump’s Threat Against Iran Is A “Wag The Dog” Move To Distract From Putin Summit [VIDEO]

As CNN’s New Day covered President Donald Trump‘s explosive late-night tweet threatening Iran, the morning show concluded: this is a means to distract from his terrible week. New Day co-host Alisyn Camerota pointed out that Trump predicted multiple times during the Obama presidency that the former president would attack Iran to help him politically.

“Is this a distraction of some kind?” she asked guest Max Boot. The conservative writer said Trump is a “master of distraction,” and that if any other president had tweeted the same threats to Iran, “you’d think he’d probably belong in a padded cell.”

Watch the clip for their “Wag The Dog” comparison.

“Trump is kind of a master of projection and also distraction,” says @MaxBoot. “With any previous President, if you’d woken up to this all-caps tweet threatening war with Iran, you’d think he probably belongs in a padded cell, but with Trump this is kind of business as normal” pic.twitter.com/uhqNz7slXl