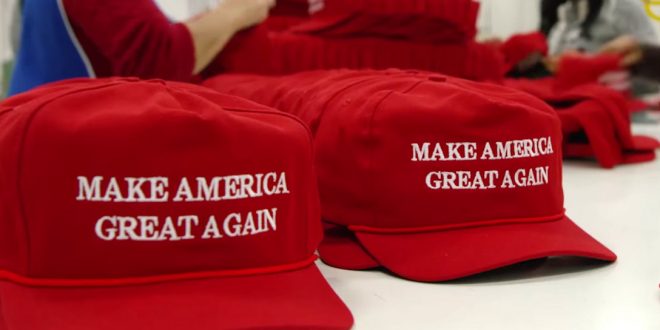 The latest round of tariffs on products from China proposed by President Donald Trump could double the price of “Make America Great Again” hats inspired by his 2016 campaign slogan, according to a merchandiser who imports them. The new tariffs announced Thursday would hit $200 billion worth of Chinese imports, especially consumer goods, including the popular hats sported by Trump supporters around the nation, according to a story first reported by the Associated Press.

David Lassoff is the manager of a California-based company that sells a range of novelty items online. “We usually sell the MAGA hats for around $9 to $12. But it could go up to $20 if we had to make them in the U.S. and embroider them here,” Lassoff said. While IncredibleGifts isn’t affiliated with the Trump campaign, Lassoff said the company has sold “a few hundred thousand MAGA hats” since Trump announced his candidacy in June 2015.

Apparently the Trump campaign doesn’t go after the companies making the knockoff hats.