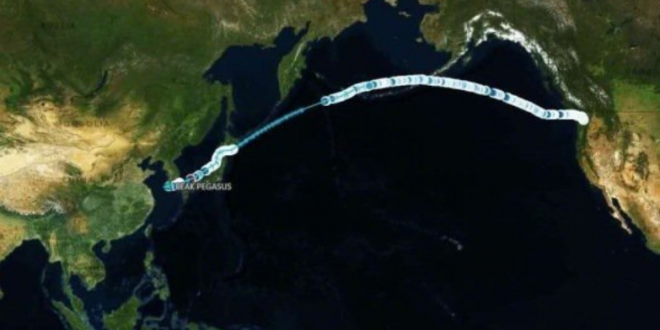 It is not often that the niche world of commodities trading enters the public conversation, but on Friday China’s social media was rooting for a ship carrying soybeans from the United States to beat the deadline before Chinese tariffs kicked in.

Tracking the journey of the vessel, Peak Pegasus, as it motored toward the northern Chinese port of Dalian was the highest trending topic on the country’s Twitter-like Weibo on Friday, beating out the World Cup, showbiz gossip and Beijing’s escalating trade war with Washington.

“Good luck bro!” said one Weibo user. “You are no ordinary soybean!” said another. Soybeans are the top U.S. agricultural export to China, with the trade worth $12.7 billion in 2017. “Poor little soybeans. Try to become a bean sprout, maybe it’s not on the tariff list,” one user said.

The ship did not make the deadline.

Trending on Chinese social media: Peak Pegasus, a ship sailing from Seattle carrying over 150 mln yuan worth of #U.S. #soybeans has been going at full speed to reach the Dalian port in northeastern #China, hoping to clear before the new tariffs kick in. #生死时速

Run! Peak Pegasus! Run! Peak Pegasus is running to China at full speed to drop off soybeans before the 25% tariff is enforced at 12:01am EDT. Unfortunately, it failed to make it. That’s way better than #Worldcup pic.twitter.com/b56i3CB7fk

Previous REPORT: Trump Wants All-American Looking Nominee
Next Carter Page: No Concern That FBI Has Dirt On Me