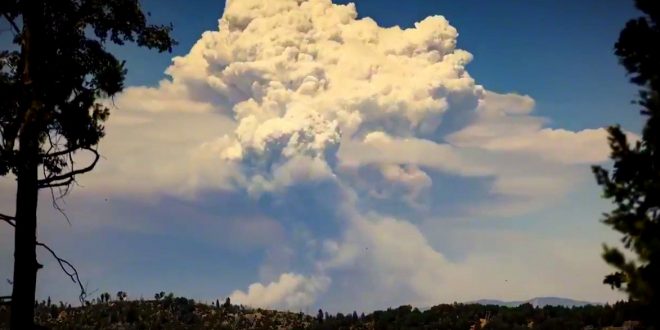 As more than a dozen major fires roar across the state of California, some of them have burned so fiercely that they’re creating their own weather systems.

The so-called “fire clouds” form over volcanic eruptions or forest fires when an intense heating of the air triggers an upward motion, pushing smoke and water vapor to rapidly rise. These foreboding clouds can develop their own weather, even producing thunderstorms with severe winds, which fan the flames and help the wildfires spread.

The number of people ordered to flee from two Northern California wildfires swelled Monday to 15,000 as the flames rolled toward several small lake towns. Meanwhile, firefighters were hopeful that the state’s largest and deadliest blaze of the year was slowing down after days of explosive growth.

The twin fires in Mendocino and Lake counties flared up late Sunday, forcing the new evacuations from the 4,700-resident town of Lakeport and other communities near Clear Lake, about 120 miles north of San Francisco. The blazes have destroyed six homes and threaten 10,000 others.

The so-called Ranch Fire and River Fire both started Friday and are known as the Mendocino Complex. So far, the flames have blackened 87 square miles, or nearly 56,000 acres, with 10 percent containment.

Another breathtaking example of a pyrocumulus cloud over the #CarrFire this week — generated when the fire is so hot the air explodes upward, creating a new local weather pattern that can bring strong winds, lightning, and… new fires.