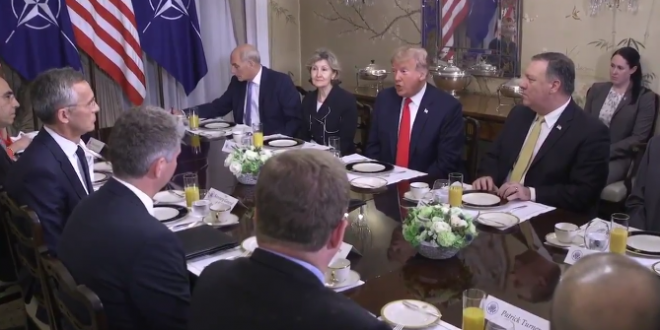 President Donald Trump unleashed his most remarkable broadside yet against a European ally on Wednesday, accusing Germany of being “totally controlled by Russia” and of not meeting its obligations to the NATO alliance. “Germany, as far I’m concerned, is captive to Russia,” Trump said.

That extraordinary rhetoric represents Trump’s strongest attack to date on NATO allies – even as he himself prepares to meet with Russian President Vladimir Putin next week in an effort to improve U.S.-Russian relations.

The source of Trump’s ire: German support for a pipeline that would bring Russian natural gas through the Baltic Sea to central Europe, all while Germany spends just 1.24 percent toward the collective defense of NATO allies.

Merkel responded to Mr. Trump’s remarks as she arrived for the summit, telling reporters: “I have experienced myself how a part of Germany was controlled by the Soviet Union. I am very happy that today we are united in freedom, the Federal Republic of Germany. Because of that we can say that we can make our independent policies and make independent decisions. That is very good, especially for people in eastern Germany.”

CBS News White House correspondent Weija Jang says President Trump set the tone for the summit at his breakfast meeting with Stoltenberg; typically leaders hash out conflicts in private, but the tense exchange unfolded with cameras rolling. It left no question as to how hard the president intends to press America’s NATO allies over money.

Trump’s borderline insane attack on Germany at NATO summit is a clear and present danger to the post-war order.

Trump’s tendency to project is a core personality trait. He calls Germany a “captive of Russia”.

Again, Putin getting a return on his investment in helping elect Trump. Projecting a falsehood onto Germany which more aptly describes him. https://t.co/Nx3uWxZSqo

Quite interesting to watch John Kelly’s face in the background as Trump says that “Germany is totally controlled by Russia.” (via ABC). pic.twitter.com/qJvj30a3zv

US ambassador to NATO @kaybaileyhutch looks stricken sitting next to Trump as he says “Germany is totally controlled by Russia.” https://t.co/sV4jaMEaIM pic.twitter.com/FpwTBN48JD

Previous Russian Mining Company Places Trump’s Seal Of Approval On Asbestos Pallets: Donald Is On Our Side!
Next Trump Administration To Pay For Detention Of Migrant Children By Siphoning Funds From HIV/AIDS Program