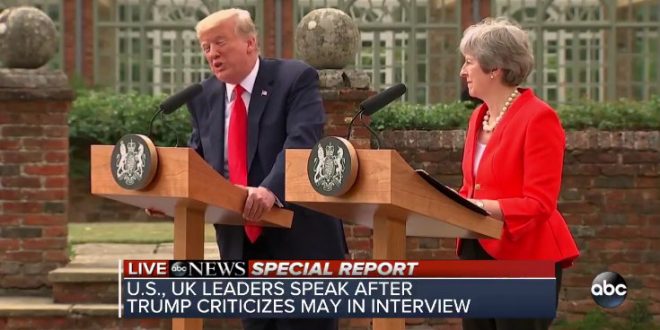 President Trump on Friday at an international press conference lashed out at CNN, declaring that he would not take questions from the network. CNN correspondent Jim Acosta attempted to interject with a question during a press conference with Trump and British Prime Minister Theresa May.

“Since you attacked CNN can I ask you a question?” Acosta said, referencing an earlier barb from Trump. “CNN is fake news. I don’t take questions from CNN,” Trump responded. “Let’s go to a real network,” he added, giving a question to John Roberts of Fox News. “Well we’re a real network too, sir,” Acosta responded.

After criticizing CNN, Pres. Trump declines to take a question from a CNN reporter at joint presser with Theresa May. “CNN is fake news. I don’t take questions from CNN.”