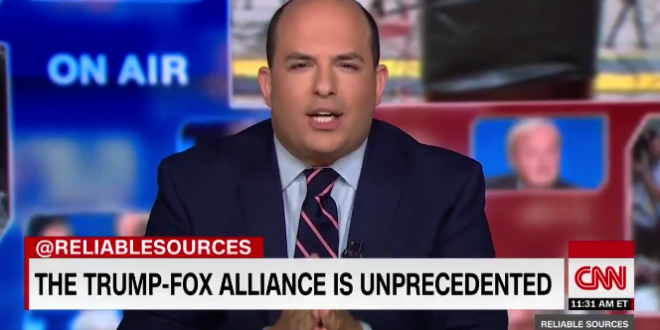 CNN host Brian Stelter offered a scathing assessment of President Trump’s close relationship with Fox News host Sean Hannity on Sunday, describing a relationship that he said is both highly unprecedented and “weird.”

“When Hannity’s off the air he gossips with Trump and gives advice about who to hire,” Stelter said on CNN’s “Reliable Sources.” “So let’s just underscore how weird this is. No TV host has ever had this kind of relationship with a U.S. president before.”

Stelter then broadened his criticism to include Fox News as a whole, saying that the conservative network’s support for Trump signals a sort of “merger between a culture-war TV station and a culture-war president.”

“No TV host has ever had this kind of relationship with a US president before … Sure, Obama had big fans on MSNBC, but … no one ever thought Keith Olbermann was Obama’s ‘shadow Chief of Staff'”: @BrianStelter on the relationship between Trump and Fox’s Hannity pic.twitter.com/C46vYLryA8