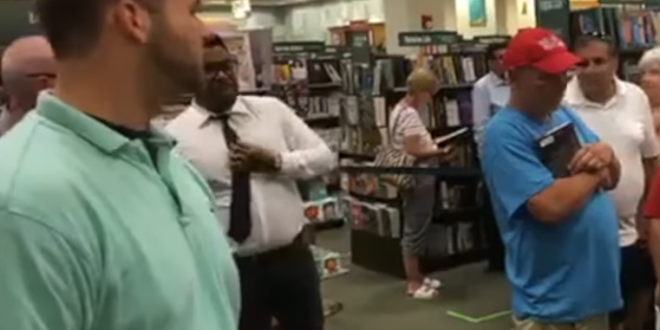 A black man yelled at former White House press secretary Sean Spicer in a bookstore and accused Spicer of calling him a racial slur when they were students at a prep school decades ago. Spicer was “taken aback” by the man’s “outrageous claim” and had no recollection of him or of being in school with him, his publicist said on Saturday.

Spicer was at a book signing in Middletown on Friday to promote his new book reflecting on his time at the press podium for President Donald Trump.

Lombard, a Newport native who now lives in Cambridge, Massachusetts, then accused Spicer of calling him the N-word and trying to fight him when they were at school. “You don’t remember that you tried to fight me?” Lombard asked. “But you called me a (N-word) first.”

Somehow Spicer thinks he can sue the Associated Press over a report on something that happened in front of multiple witnesses and was caught on video.

Former White House press secretary Sean Spicer is threatening to take legal action against the Associated Press over a report from the wire service about an incident on his book tour. Spicer’s attorney Michael J. Bowe said in a statement Saturday night that the AP “recklessly republished a categorically false accusation about Sean Spicer.” “The claim is a lie. Absent an immediate retraction, Mr. Spicer will take legal action Monday,” Bowe said.