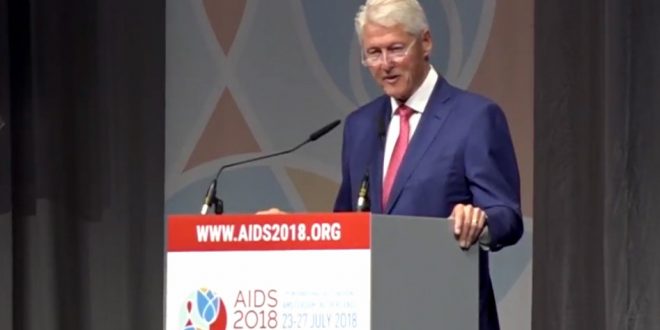 Bill Clinton: There Can Be No “Brexit” In HIV/AIDS Fight

Bill Clinton pleaded with the world Friday not to abandon the campaign to rein in the HIV virus which still kills nearly a million people every year and infects twice as many. The world must “hold the line” until a vaccine or cure is found, or face “calamitous” consequences, the US ex-president told the 22nd International AIDS Conference in Amsterdam. “There can be no Brexit in the fight against AIDS,” said the founder of the Clinton HIV/AIDS Initiative, referring to Britain’s decision to leave the European Union.

“Through a combination of complacency in some places and outright hostility to global multinational cooperative efforts in others, there is a serious risk that many people will say: ‘Let’s quit doing this’,” Clinton told delegates. “That would be calamitous.” He cited UN data showing that 1.8 million people were newly infected in 2017 with the immune system-wrecking virus that causes AIDS. The year saw 940,000 deaths. “Approximately 35 people will die while I’m up here talking,” said Clinton.

Clinton’s keynote address was interrupted by protesters who demanded that sex work be decriminalized and that the United States not host next year’s conference. Clinton paused and allowed them to have their say. See the video at the bottom of this post.

@BillClinton extraordinary speech @AIDS_conference thank you. Also for hearing & respecting the protest from those who feel & are often excluded. There is no Brexit for HIV that is not calamitous #compassion #listening #positiveregard #AIDS2018 Now hearing about the #TB concerns. pic.twitter.com/LZOSbvLZRm

. @BillClinton spoke of the @AIDS_conference as a place of possibilities. He referred to Nelson Mandela’s words to inspire everyone who is fighting a good cause: ‘I lost almost everything, but 2 things they could never take from me: my mind and heart’. #AIDS2018 @ClintonFdn pic.twitter.com/yUpFEX8922