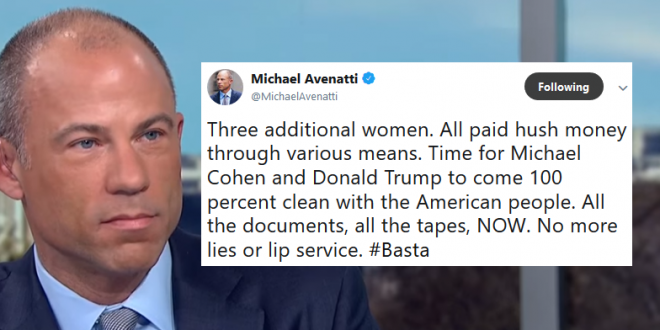 Avenatti disclosed the information at a community forum in West Hollywood, California, but he would not provide additional information. Asked if he had evidence that the women had relationships with Trump, Avenatti said: “Yes.”

He said he was “not at liberty to share” the evidence because he didn’t have permission from his clients to disclose specifics. But Avenatti said the women, who contacted him months ago, were “paid hush money prior to the 2016 election.”

Three additional women. All paid hush money through various means. Time for Michael Cohen and Donald Trump to come 100 percent clean with the American people. All the documents, all the tapes, NOW. No more lies or lip service. #Basta

“Cohen’s attorney, Lanny Davis, would not say if he knew whether Cohen had been involved in any other hush-money deals on behalf of Trump.” Wait, I’m confused. What happened to Cohen being a “Patriot” and having “Love of Country?” Release ALL of the info and tapes NOW. #Basta

Avenatti Is Representing 3 New Women Paid Off By Trump; One Was Pregnant https://t.co/gsiFD7KYDS pic.twitter.com/qd1hR2AYsR

Previous Trump Rages: Cohen Is Lying To Save His Own Skin
Next Feds Hand Out Lion Trophy Permits To GOP Donors