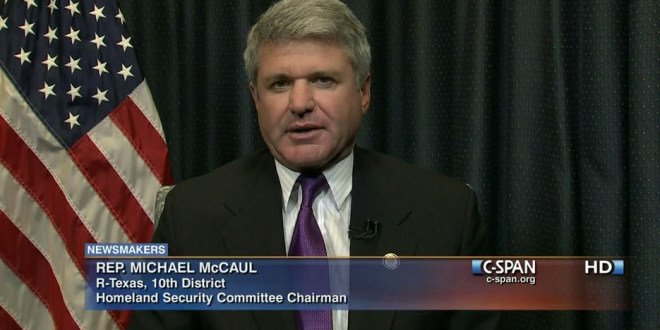 Well, this is a curious story.

The sprawling West Austin home of Congressman Mike McCaul used more city-supplied water than any other single-family residence in 2017, according to the Austin water utility.

McCaul’s hillside home near Lake Austin was one of 22 residences calculated to have used more than one million gallons of city water in 2017. The exact amount of water consumed at McCaul’s $7.3 million hillside home is unclear because the family elected to have some information about their usage redacted from public records.

However, the McCauls did use more than 1.4 million gallons of water last year. That’s known because the resident listed second on the city’s usage list, Betsy Abell, president of the Buena Vista Foundation, used 1,400,900 gallons at her home near Pease Park.

McCaul claims to have “problems” with his water pipes. Is a massive hydroponic weed operation out of the realm of possibilities? McCaul is the third-wealthiest member of Congress with a net worth estimated at $300 million.

McCaul’s water-hogging is like his tax policy—take as much as he can, to our detriment. https://t.co/y3BDSflIHZ