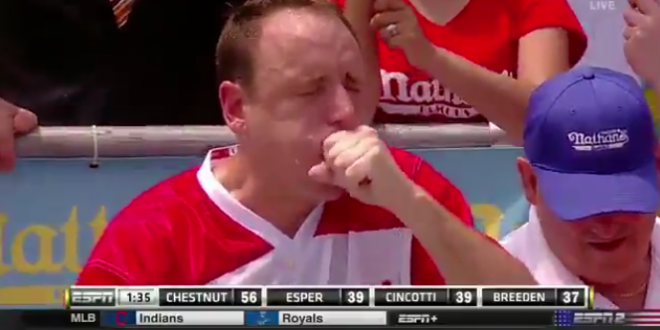 Joey Chestnut proved it again: He’s second to bun. The king of competitive eating slammed down a record 74 franks in steamy Coney Island to easily capture his 11th Nathan’s Famous Hot Dog contest in the last 12 years. He gobbled up 10 more than the next-closest chomper in the annual Fourth of July throwdown.

“Oh my God, I got in a vicious rhythm,” a sweaty Chestnut said. “I was feeling good today. I think I get out of bed because I love to eat. I tried to have fun and enjoy the food.”

Chestnut, 34, of San Jose, Calif., pulled away from the competition Wednesday by the mid-way mark of the 10-minute contest to win yet again. He zipped past his record mark set last year — a staggering 72 hot dogs in the seaside feeding frenzy.