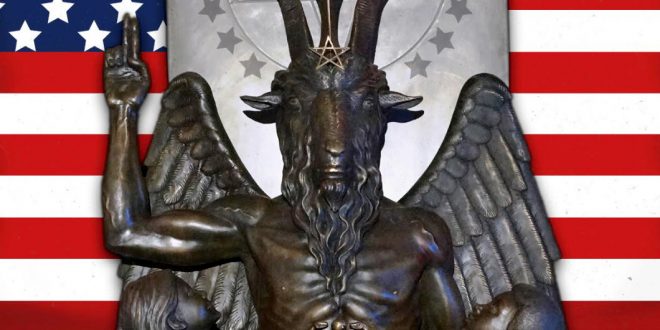 Via press release from the Satanic Temple:

The Satanic Temple’s infamous Baphomet statue will make an appearance at the Arkansas state Capitol on August 16th from 1-3pm during “The Satanic Temple’s Rally for the First Amendment.” The rally is intended to bring together religious leaders of different faiths to discuss the importance of the First Amendment and its protection for religious pluralism as being essential to preserve American democracy.

According to The Satanic Temple’s spokesperson, Lucien Greaves, “Freedom of Religion means that the government must not be allowed to endorse one religion over another or inhibit any religious voices from access to public forums in favor of another. By installing a Ten Commandments monument on their capitol grounds while rejecting other privately donated monuments of religious significance, the Arkansas State government has flagrantly violated a founding Constitutional principle, for which we call upon the people to rally with us to defend.”

The appearance of the 7½ foot bronze statue on Capitol grounds has been a long time coming. In August 2015, Arkansas Legislature passed a bill introduced by State Senator Stanley “Jason” Rapert to install a Ten Commandments statue on State Capitol grounds. By rejecting The Satanic Temple’s subsequent offer to donate its statue of Baphomet on Capitol grounds, Arkansas violated the establishment clause of the First Amendment by endorsing one religion over others.

Last year the first version of the Ten Commandments monument was destroyed by an apparently mentally ill man who filmed himself driving his pickup truck onto the Capitol grounds.

Rapert also appeared on JMG in March of last year when he authored a successful bill calling for a constitutional convention of the states to ban same-sex marriage and abortion.

Rapert earlier earned headlines by calling for the US to rain nuclear bombs down on ISIS and for telling a Tea party gathering that they should no longer “allow minorities to run roughshod over what you people believe in.”

BREAKING NEWS: the answer to every issue and problem in the world has been discovered in a book found hiding in plain sight all over the world. The book has been burned, banned and belittled, but fortunately many copies remain. Go get a copy as fast as you can. The #Bible #Wisdom pic.twitter.com/BkQ76zScSV