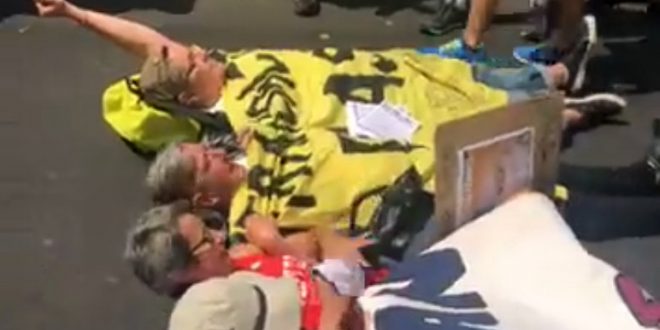 A group of lesbian activists blocked the start of the Pride in London march today (7 July) in protest against transgender women. A group of eight women stormed the parade route without accreditation. Then five of them laid down on the road in front of the parade and draped a banner over them.

The banner read: ‘Transactivism erases lesbians’. They then blocked the parade route for about 10 minutes. One of the activists shouted out: ‘A man who says he’s a lesbian is a rapist.’ The group also had a banner that said ‘Lesbian = female homosexual’, as well as flyers with the organization ‘Get the L out’ as the headline.

Disgraceful that anti-trans protestors were allowed to lead #prideinlondon today. @prideinlondon need to apologise immediately for allowing this to happen. These people should never be allowed to march at pride again. LGBT Labour stand shoulder to shoulder with our trans members.

BREAKING: @PrideInLondon organisers admit they decided to allow anti-trans protesters to lead the parade, “in the interest of safety”. pic.twitter.com/Gt3gHVpZa6

hey trans gals who went to London Pride today and had to see the TERFs protesting our existence,

i love all of you. you're fucking great. you're a woman. if you identify as such, you're a lesbian. TERFs don't know shit. they're vocal, but they will lose out.

London Pride this year, first group to pass was TERFs with a “transactivism erases lesbians” banner. Almost got in trouble with police shouting at them to fuck off. Pride is a riot, and I won’t stand quietly while I’m told I’m not welcome at pride as a trans lesbian.

So they’re allowing a group of TERFS to start the pride parade in London, and now the group are protesting by lying on the floor stopping the parade from happening. Cba man pic.twitter.com/Ff3jfQ1gko

Trying to see the TERFs at London Pride for what they are: a lunatic fringe, a handful of roasters – 10 or so, in this case – turning up to ruin a party. Miserable white people who have their rights and want to pull the ladder up after them. TERFs are Gay UKIP.