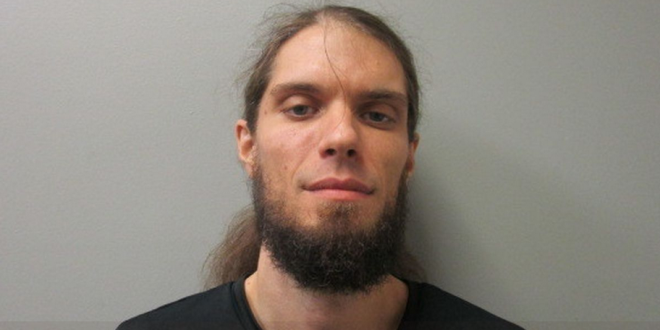 A man who mimicked the derisive remarks of former Trump campaign manager Corey Lewandowski and brandished a handgun at immigration protesters in Alabama over the weekend was charged with menacing and reckless endangerment, AL.com reported Sunday.

With a gun tucked into the waistband of his pants, Shane Ryan Sealy shouted “womp womp” and carried a sign that said “ICE ICE baby” as he walked in front of protesters gathered in Huntsville, Alabama, part of a nationwide series of marches on Saturday against the Trump administration’s immigration policies. As an Episcopal priest delivered a prayer at the protest, Sealy allegedly got into an altercation with a protester that began as a shoving match and escalated once Sealy drew his firearm.

No shots were fired and Sealy, a former high school teacher, put his gun back into his pants and begun to walk away, trailed by a handful of protesters. He was arrested by police for possessing a gun within 1,000 feet of a protest. The later charges of menacing and reckless endangerment are misdemeanors.

It began around noon, as an Episcopal priest delivered a prayer to about 100 protesters gathered around the gazebo and a man marched back and forth in front of her, shouting “womp, womp!” “Holy and ever-loving God …” said the priest, Kerry Holder-Joffrion. “Womp, womp!” said the man.

“We pray for the children of this nation and all nations.” “WOMP, WOMP!” A Huntsville police spokesman said the man — identified as 34-year-old Shane Ryan Sealy — pushed one of the protesters, who pushed him back and knocked him to the ground, at which point Sealy allegedly produced the weapon.

Best photo yet: Sealy brandishing his gun while a #FamiliesBelongTogether protester takes video and alerts police to the threat pic.twitter.com/RcEkCaGUFZ

Yesterday in Huntsville Alabama at a protest against Trump’s immigration policies a counter protester who had a sign reading “ICE ICE Baby” pulled out a gun and yelled “WOMP WOMP” as an intimidation tactic. Yes, he was mimicking Trump’s former campaign manager.

Alabama man took a cue from Trump’s ally Corey Lewandowski and shouted “womp womp” moments before he brandished a handgun at an immigration rally https://t.co/A2rMyLQzVb pic.twitter.com/rAskuUu14N

Further pics of people on the ground and picking themselves up after pic.twitter.com/p6vA1m69Ik