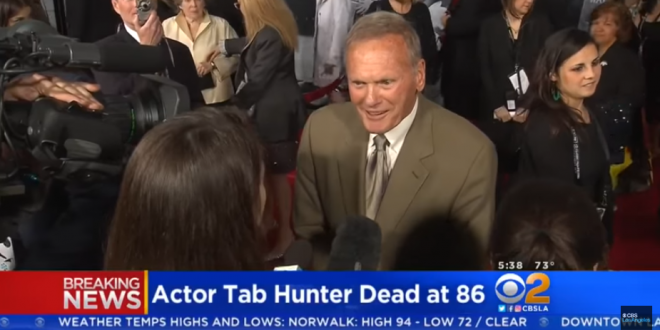 Tab Hunter, a former on-screen heartthrob and a gay icon, has died. He was 86. The news was announced on a Facebook page associated with the actor, but a cause of death was not included. With his blonde hair, piercing blue eyes, and toothy smile, Hunter rose to the top ranks of Hollywood leading men in the 1950’s and early ’60’s.

He appeared in the likes of “Damn Yankees” and “Battle Cry,”and had chart-topping records such as “Young Love.” But at the height of his popularity he was dogged by rumors that he was gay, a potentially career-ending rumor during that culturally conservative era.

He was rediscovered in middle age, however. Hunter was cast opposite Divine in “Polyester,” a low-budget John Waters comedy that gleefully sent up everything from alcoholism to foot fetishism. The film helped introduce Hunter to a younger audience, some of whom were unfamiliar with his pin-up past.