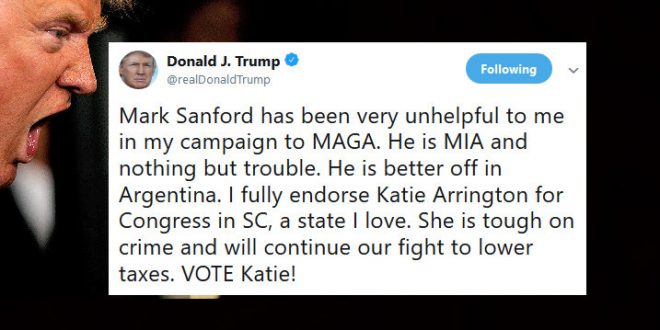 President Donald Trump is weighing in at the 11th hour on a key Congressional primary in South Carolina — and he’s doing it in a pretty shocking way. The president has come out strongly against Rep Mark Sanford (R-SC) in his primary battle against Katie Arrington in South Carolina’s 1st District. In the process, he took a pretty good swipe at the Congressman’s infamous affair and disappearance in 2009 — which made put him in the headlines.

Mark Sanford has been very unhelpful to me in my campaign to MAGA. He is MIA and nothing but trouble. He is better off in Argentina. I fully endorse Katie Arrington for Congress in SC, a state I love. She is tough on crime and will continue our fight to lower taxes. VOTE Katie!