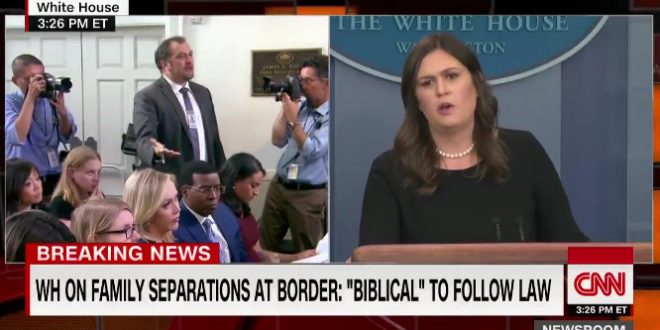 CNN contributor Brian Karem yelled at White House Press Secretary Sarah Sanders during a briefing about the practice of separating immigrant children from their families as a deterrent. “Don’t you have any empathy? Come on, Sarah. You’re a parent. Don’t you have any empathy for what these people are going through?” he pressed, his voice raised. “They have less than you do. Come on, seriously.”

“Settle down. I’m trying to be serious but I’m not going to have you yell out of turn,” Sanders replied. “These people have nothing,” he persisted. “I know you want to get more TV time but that’s not what this is about,” Sanders said. “Honestly, answer the question,” Karem insisted. “It’s a serious question. They have nothing, they come to the border with nothing, and they throw children in cages. You’re a parent. You’re a parent of young children. Don’t you have any empathy for what they go through?”

“Come on Sarah, you’re a parent. Don’t you have any empathy for what these people are going through?” CNN political analyst Brian Karem presses White House press secretary Sarah Sanders on family separations at the US-Mexico border https://t.co/b6r513WU0R pic.twitter.com/FqdjUK4Jhe

Reporter Brian Karem repeatedly asks Sarah Sanders about the Trump policy of separating undocumented children from their parents: “Come on, Sarah, you’re a parent. Don’t you have any empathy?”

She says he’s trying to get more TV time. pic.twitter.com/NGVPnh1ISv

Brian Karem is all of us.

Watch as he gets heated with Sarah Huckabee Sanders while discussing separating children from their parents.

“You’re a parent,” shouts WH correspondent @briankarem at @presssec, in a tense moment over the Trump administration’s zero tolerance policies at the border.

Sarah Sanders stands at the White House podium and repeats Trump's lie that there is a law requiring children to be taken from their parents at the border.

This is a lie, and they know it.

There is no law, it is Trump's policy. He started this, and he could stop it at any time.

Sarah Sanders is repeating over and over again that it's the law to separate immigrant children and from their parents.

Fact check: It's not the law. The Trump administration is making the decision to do this and does not have to do it.

Previous LIVE VIDEO: White House Press Briefing
Next New Joe Manchin Ad: I Wanted Mexico To Pay For The Wall But They’re Not, So I Voted With Trump [VIDEO]