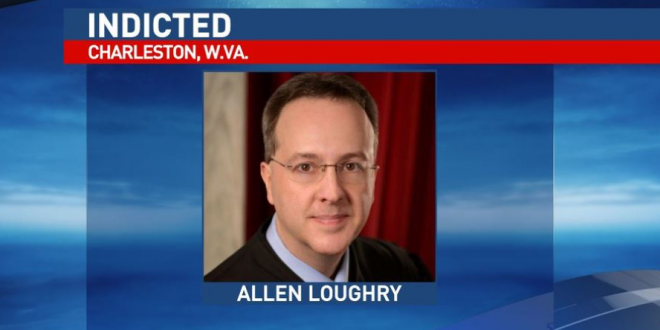 You knew how to finish the headline before you clicked.

West Virginia Supreme Court Justice Allen Loughry, who authored a book on political corruption in his home state, was indicted on 22 federal charges, ranging from fraud to witness tampering, for alleged corruption of his own.

According to the indictment, Loughry fraudulently used a government-issued credit cards for personal use, took an historic Supreme Court desk back to his house for use in a “home office,” and then lied about it to cover it up.

Prosecutors says the Justice Loughry falsified the mileage on trips he took in a Supreme Court car, for which he used a government card for payment. They also say he claimed to use government vehicles for business, when he was really using them – and credit cards – for personal use. He also allegedly lied to fellow Supreme Court Justices about it.

Loughry, a Republican, faces up to 395 years in prison. Last year he authored the majority opinion in a 3-2 ruling which declared that West Virginia’s hate crime laws do not apply to attacks on LGBT citizens.

He reached this conclusion by citing several dictionary definitions and ignoring Supreme Court precedent interpreting sex discrimination to encompass “the entire spectrum of disparate treatment of men and women resulting from sex stereotypes.” Loughry also noted that the legislature has repeatedly tried and failed to add “sexual orientation” to its hate crime statute. Its failure to add these words, Loughry asserted, indicates that the legislature did not intend to protect LGBTQ people from hate crimes.