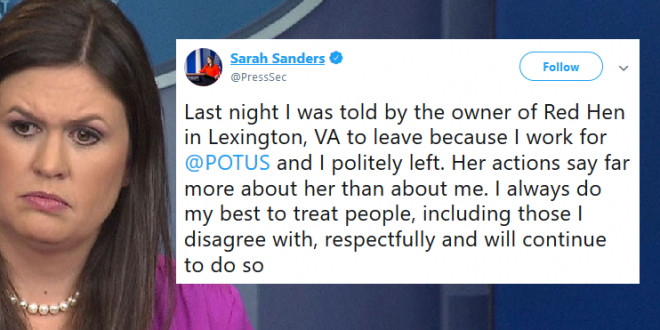 After a Virginia restaurant reportedly threw out White House press secretary Sarah Huckabee Sanders and her family on Friday night, reviewers swarmed to their Facebook and Yelp page to post feedback.

On Friday night, Jaike Foley-Schultz, allegedly a waiter at The Red Hen, a restaurant on Washington Street in Lexington, took to Facebook to announce that Sanders was prevented from eating at their establishment.

“I just served Sarah huckabee sanders for a total of 2 minutes before my owner kicked her out along with 7 of her other family members…” he wrote.

Shortly after, hundreds of reviews started flooding into The Red Hen’s Yelp and Facebook pages from both Democrats and Republicans, ranging from one star to five stars. Most reviewers thanked the restaurant for taking a moral stand.

Last night I was told by the owner of Red Hen in Lexington, VA to leave because I work for @POTUS and I politely left. Her actions say far more about her than about me. I always do my best to treat people, including those I disagree with, respectfully and will continue to do so

.@PressSec got kicked out of the Red Hen restaurant in Lexington, Va tonight. Apparently the owner didn’t want to serve her and her party out of moral conviction. pic.twitter.com/jr3bfiY3XY