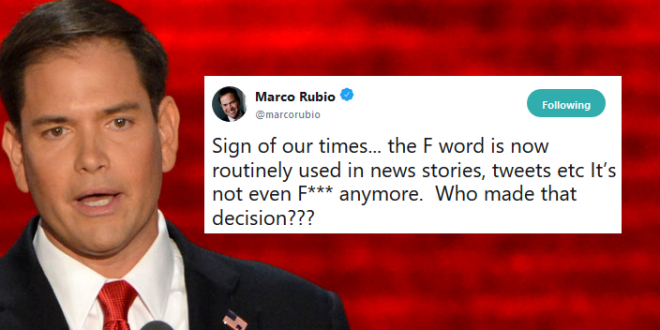 Sen. Marco Rubio this morning took to Twitter to lament the F-word’s appearance in news reports, likely spurred by last night’s unbleeped F-bomb on CNN, which was delivered by a Maryland shooting survivor in response the the usual “thoughts and prayers” that spill out after every mass shooting. Rubio apparently sees no link between coarsened language in the media and the actions of the foul-mouthed vulgarian in the White House, but his Twitter followers were more than eager to school him.

Sign of our times… the F word is now routinely used in news stories, tweets etc It’s not even F*** anymore. Who made that decision???

I know. It was just wild when I started seeing the media use the word pussy without bleeping it or anything. God, how did that even happen? Somebody must have said it in such a blunt, unavoidable way that the media had to report it in full, but who?

Dead kids and journalists don’t bother Marco. You know what does? Profanity.

There are nearly 2000 fucking kids who were taken from their fucking parents by the fucking government that you fucking work for, most of whom haven’t been fucking returned. And you’re going to make a fucking word the fucking thing you make noise about? Are you fucking serious?

Worry about so-called bad words in a time when Congressmen can’t bring themselves to care about children ripped from parents and instead hold an emergency hearing on the world’s most investigated emails of a person who has been out of government for 5 years? That’s fucking crazy.

A message from your base. pic.twitter.com/ygAPFMl11Z

Senator who has taken more than $3 million from the @NRA is upset a gun violence victim used the word “fuck” after she was shot at by a convicted stalker who had easy access to a gun. https://t.co/4Xnk6aeARx

Every time I speak of the haters and losers I do so with great love and affection. They cannot help the fact that they were born fucked up!

Who made the decision that the “F” word was okay to be routinely used?

I hope you know that “pearl necklace” you’re clutching was a gift from Putin.https://t.co/ldosAIPahb