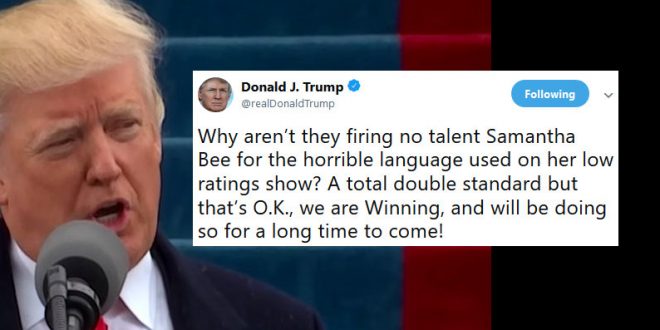 The Pussy Grabber-In-Chief is pretending to be mad:

President Trump on Friday blasted TBS over comedian Samantha Bee’s recent use of a vulgar slur to describe first daughter Ivanka Trump. After Roseanne Barr’s show was cancelled over her racist tweet about Obama adviser Valerie Jarrett, Trump also accused ABC of a double standard, criticizing the network for apologizing to Jarrett about Barr’s comment, but not apologizing to him for other negative comments about him.

Why aren’t they firing no talent Samantha Bee for the horrible language used on her low ratings show? A total double standard but that’s O.K., we are Winning, and will be doing so for a long time to come!

FWIW, the word Samantha Bee used (and other such words) was emblazoned on many a T-shirt worn and sold at Trump rallies throughout 2016 campaign https://t.co/3QcRfauoVA