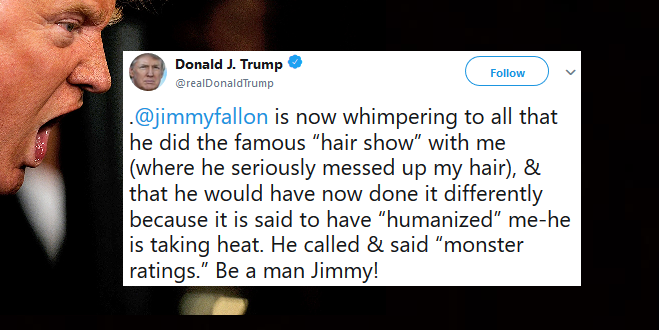 Late-night host Jimmy Fallon should “be a man,” President Donald Trump wrote on Twitter Sunday night, instead of “whimpering” over criticism that stems from the president’s now-infamous 2016 appearance on his show. The dig at Fallon, the host of NBC’s “Tonight Show,” stemmed from an interview the comedian sat for last week with The Hollywood Reporter in which he said he “made a mistake” by engaging in a jovial back-and-forth with Trump during the then-candidate’s September 2016, appearance on his show. The interview famously ended with Fallon tousling Trump’s hair.

.@jimmyfallon is now whimpering to all that he did the famous “hair show” with me (where he seriously messed up my hair), & that he would have now done it differently because it is said to have “humanized” me-he is taking heat. He called & said “monster ratings.” Be a man Jimmy!

In honor of the President’s tweet I’ll be making a donation to RAICES in his name.

LATE NIGHT HOST MOST LIKELY TO GET INTO FIGHT WITH TRUMP

Previous Trump Tells Huckabee: The Media’s Coverage Of My Summit With Kim Was “Almost Treasonous” [VIDEO]
Next Schumer Reveals His Lesbian Daughter’s Engagement