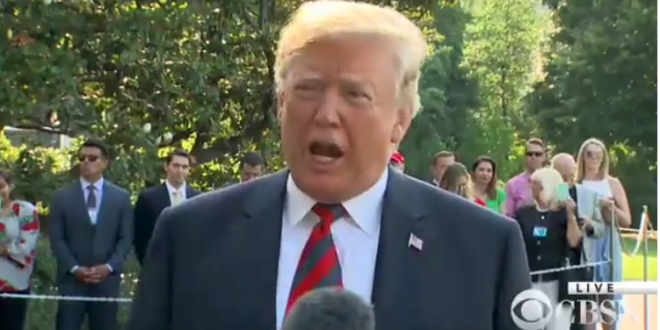 President Donald Trump on Wednesday signaled that he plans to sign an executive action designed to keep families together during detention on the U.S.-Mexico border.

“I’ll be signing something in a little while that’s going to do that,” he told reporters during an event at the White House, after saying he wanted families to be kept together. “I’ll be doing something that’s somewhat preemptive and ultimately will be matched by legislation I’m sure,” he said.

The action is expected to allow families to be housed together even while adults in the family are being detained or prosecuted for crossing the U.S. border illegally, or for seeking asylum at the border outside of a designated border entry point.

If Trump “signs something” to end the separation of families do not let him off the hook – he created this situation. It wasn’t a problem he dealt with. It was a political maneuver that spiraled out of his control.

President Trump says he will sign something “in a little while” to end family separation on the border. He announces he’s canceling the congressional picnic because it didn’t feel right. (They had already started grilling steaks at the White House.)

Today: Trump says he will sign 'something' to keep families together

2 days ago: "Congress and the courts created this problem, and Congress alone can fix it," Secretary of Homeland Security Kirstjen Nielsen told reporters.

ALSO — Trump says he's canceling the congressional picnic, set for tomorrow, for which WH cooks have been preparing steaks all day…

"It just didn't feel right to me," he said, per @abbydphillip

“It doesn’t feel right to have a picnic for Congress when we’re working on something really important” Trump adds after canceling the congressional picnic as steaks are being pulled off of the grill. No word on him canceling his campaign rally tonight in Duluth, Minnesota.

Previous Texas Billboard: Liberals Get Out Of Our Great State
Next Gov. Cuomo Proclaims Edie Windsor Day In New York