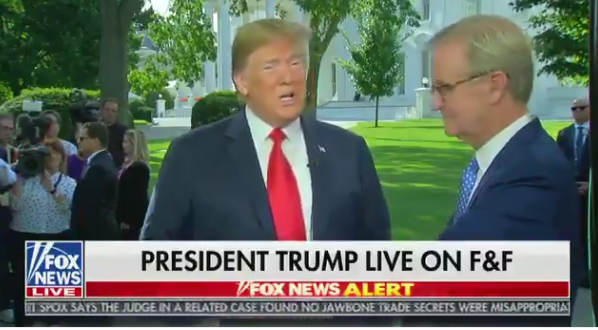 Trump Tells State TV: The FBI Was Plotting Against My Election And Comey Should Be Locked Up [VIDEO]

President Donald Trump says the Justice Department watchdog report on the Clinton email probe shows the FBI was biased against him “at the top level” and was “plotting against my election.”

Trump is giving an impromptu interview with Steve Doocy of “Fox & Friends” on the North Lawn of the White House Friday. He says of the report: “That was the most biased set of circumstances I’ve ever seen in my life.”

The inspector general report, while damaging to the FBI and to Comey personally, does not support Trump’s allegation that political preferences influenced the conduct of the email investigation into his Democratic presidential rival. Trump tells Doocy: “The end result was wrong. There was total bias.”

Despite the IG report finding no criminal wrongdoing on James Comey’s part, Steve Doocy actually asks “Should James Comey be locked up?”

Trump responds: “Certainly, they just seem like very criminal acts to me.” (via FOX) pic.twitter.com/ZQVum1lQal