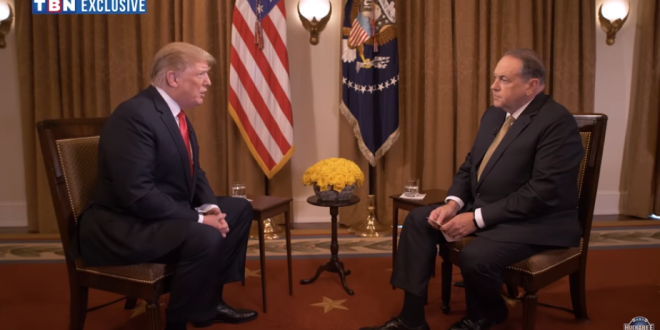 Trump Tells Huckabee: The Media’s Coverage Of My Summit With Kim Was “Almost Treasonous” [VIDEO]

President Trump told former Arkansas Gov. Mike Huckabee in an interview that mainstream media’s coverage of his summit with North Korean leader Kim Jong Un was “almost treasonous.” He also revealed that evangelicals are more thankful than Jews for moving the U.S. embassy to Jerusalem.

On his show on Trinity Broadcasting Network that aired Saturday, Huckabee asked Trump if he trusts Kim Jong Un, and the president said he certainly does. Trump said he’s had a “very good relationship” with the North Korean leader and “we have a good chemistry together.”

“He’s looking to do the right thing,” Trump told Huckabee, whose daughter Sarah Huckabee Sanders is the White House press secretary. “He wants to bring enterprise into North Korea. They have tremendous potential in terms of location. It’s an amazing piece of property to put it in real estate terms. It’s got unbelievable natural potential and I think he wants to do something with it.”