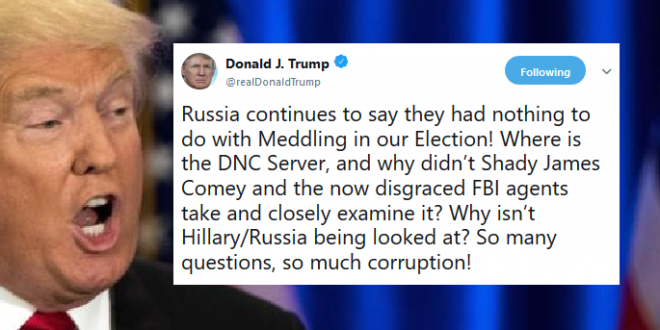 The DNC in April sued the Russian government, the Trump campaign and WikiLeaks, alleging that they conspired to aid Trump in the 2016 election. The DNC said that by alleging that by hacking and publishing the committee’s emails, multiple individuals and groups were part of a larger conspiracy to damage Hillary Clinton’s campaign and help Trump win.

Russia continues to say they had nothing to do with Meddling in our Election! Where is the DNC Server, and why didn’t Shady James Comey and the now disgraced FBI agents take and closely examine it? Why isn’t Hillary/Russia being looked at? So many questions, so much corruption!

JUST IN: Trump appears to side with Russia on election interference ahead of summit with Putin https://t.co/QifPjk8mzd pic.twitter.com/XrNbm19SQj

About a half hour from announcing the location of the next Trump-Putin meeting, President Trump seemingly sides with Putin over his own US intelligence community, which assessed that Russia did meddle in our election: https://t.co/lHos1a6TCN