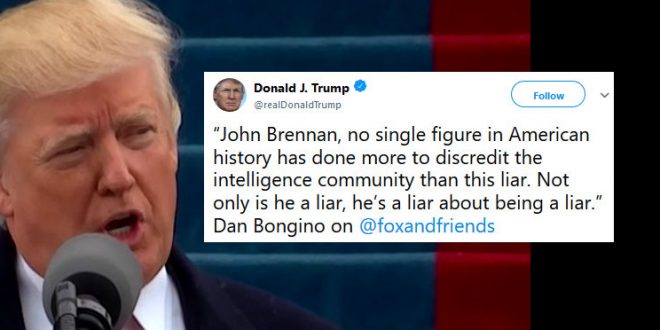 Trump and Bongino are reacting to a blistering Washington Post op-ed written yesterday by Brennan. An excerpt:

The impact of the Trump presidency will be felt for many years to come. Most worrisome is that his use of falsehoods, his mean-spirited and malicious behavior, and his self-absorption will be emulated by many young Americans — indeed, young people globally — who look to the president of the United States as a role model.

Many have condemned my public criticism of Mr. Trump, arguing that as a former CIA director, I should bite my tongue. My criticisms, however, are not political; I have never been and will never be a partisan. I speak out for the simple reason that Mr. Trump is failing to live up to the standards that we should all expect of a president.

As someone who had the rare privilege of directly serving four presidents, I will continue to speak out loudly and critically until integrity, decency, wisdom — and maybe even some humility — return to the White House.

“John Brennan, no single figure in American history has done more to discredit the intelligence community than this liar. Not only is he a liar, he’s a liar about being a liar.” Dan Bongino on @foxandfriends

Previous State Department Recognizes LGBTI Pride Month: We Reaffirm Our Commitment To Defending Human Rights
Next Bill Maher: Roseanne’s Tweets Were So Full Of Racism And Conspiracies That They Bordered On Presidential