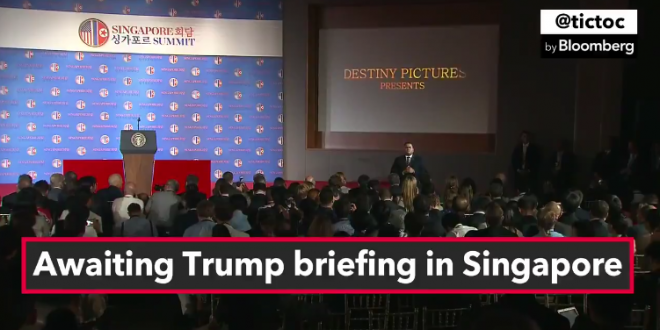 Among the many tactics President Donald Trump rolled out in his summit with North Korean leader Kim Jong Un in Singapore was apparently a four-minute video, styled like a movie trailer, that casts Trump and Kim as the heroes of a story about “two men, two leaders, one destiny.”

“History is always evolving, and there comes a time when only a few are called upon to make a difference,” the narrator of the video says. “But the question is — what difference will the few make? The past doesn’t have to be the future. Out of the darkness can come the light, and the light of hope can burn bright.”

The video is heavy-handed in its Hollywood approach — it casts the potential reconciliation between North and South Korea as a “sequel,” and the narrator proudly declares, “Destiny Pictures presents: a story of opportunity.”

Trump said he showed Kim a video made on his behalf. That video was then broadcast on screens at Trump’s presser.

A reporter asked: “Are you concerned the video you just showed can be used by Kim as propaganda?”

Trump, The DealMaster: “I will stop all US military exercises and new sanctions and in return I will also give you propaganda videos and demand nothing from you.”

During Trump’s briefing after the #TrumpKimSummit, a reporter asked: “Are you concerned that the video you just showed [earlier] can be used by Kim as propaganda?”